farmerswife has a simple multiple currency functionality that allows up to three currencies: Primary, Secondary and Third Currency options where secondary and third were converted based on the Primary and conversion rates and mainly served as a viewing option.

When upgrading, a list of all the world's official currencies will be imported into your farmerswife Server. The currencies_examples.csv file will be added to the server folder structure, under html_templates/other/currency/importer folder. 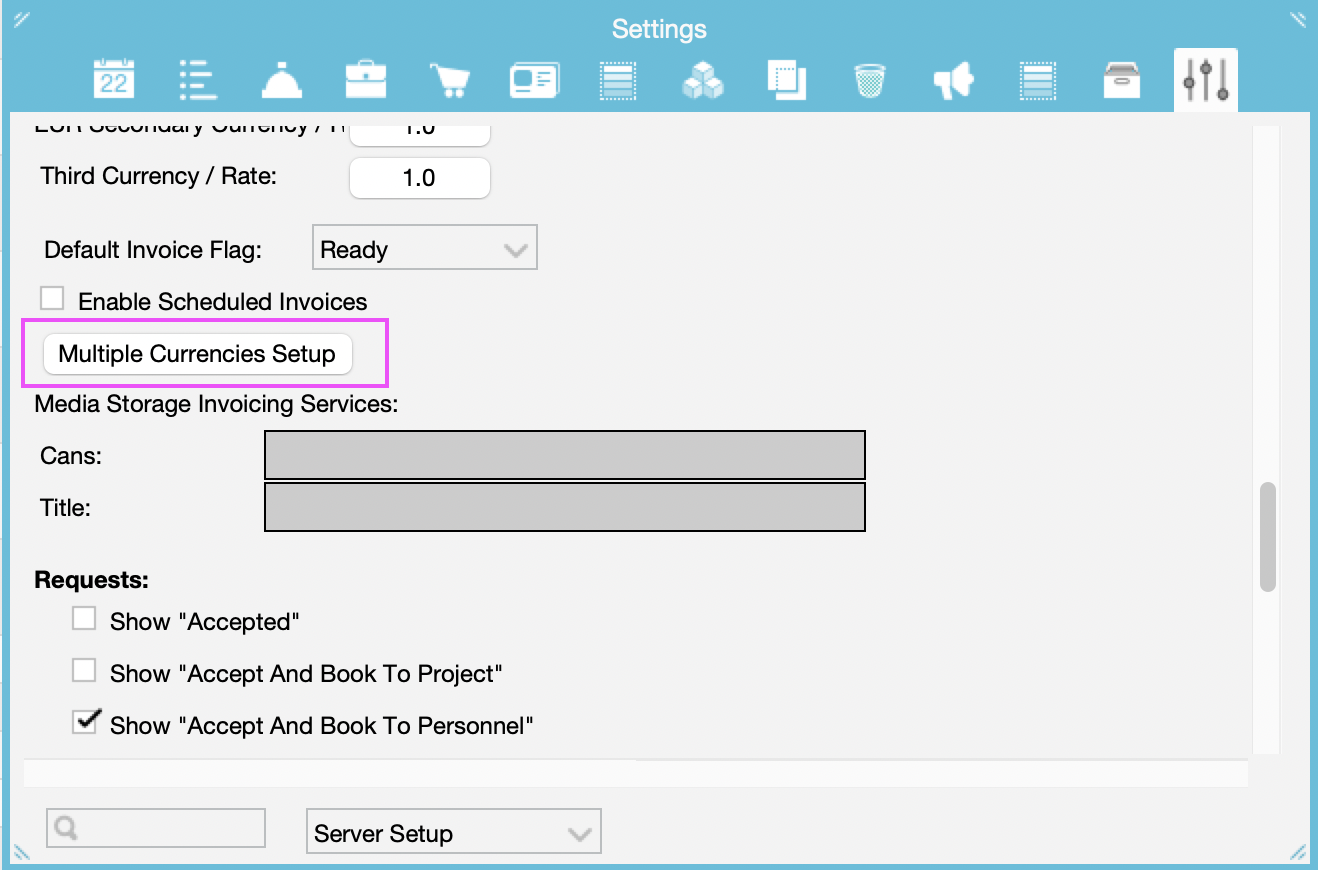 Currently this option is only active IF the company name in Server Setup > General tab = Demo DB. If you want to try out the multiple currencies please contact support.

Tick the box to Enable Multiple Currencies and choose the Main Currency for your farmerswife server. 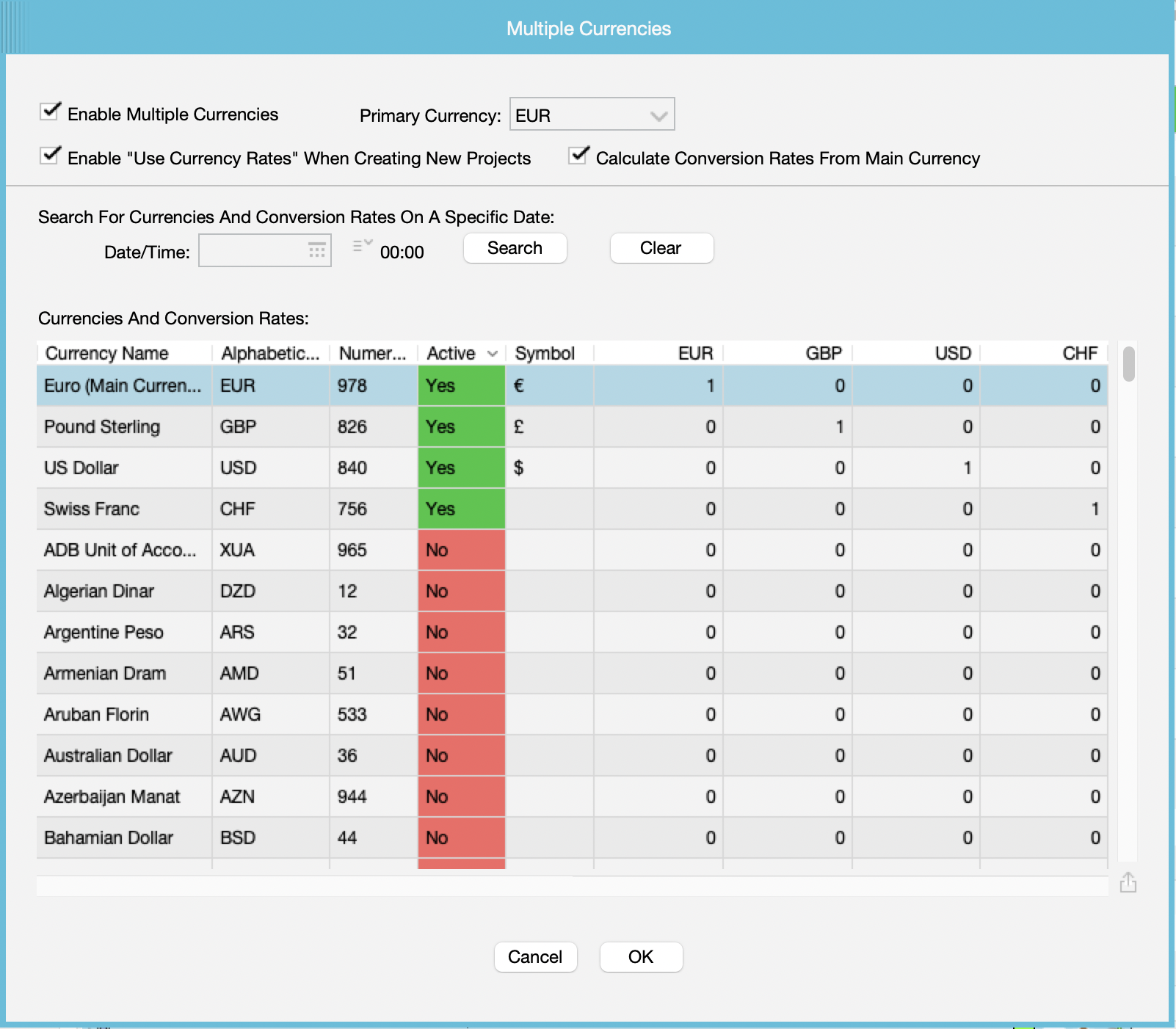 To change the Active status of a currency click in the Yes/No field and type Yes (for Active!) or No (Not Active).

On a farmerswife database with various Divisions (licensed module), you can additionally configure a default Currency per Division. This needs to be done in the farmerswife Server application > General Tab > click the Division to open and select currency.

When creating a new Project for the UK Division, the Currency field will automatically show GBP. This can be changed if you have not saved the Project yet. An example would be that UK Division creates a Project but the client is from Germany, so the Project needs to be in EUR.

farmerswife always needs to have a Main Currency to be able to generate consolidation reports later on.

The "Currencies And Conversion Rates" table shows the complete list of all the currencies that were imported. EUR, GBP and USD are Active by default and have a conversion rate.

The currency that was selected to be the Main, jumps to the top of this list and is highlighted in blue.

This table has the following columns:

When enabled, the option "Use Currency Rates" will be enabled by default on new Projects.

In general you can configure Rates per Currency. This is called "Currency Rates". It means that you can add a specific Buy and Sell Rate for a number of Currencies on one Object (Suites, User, Resources, Services, Materials, Expenses, Media Orders), Object Class and Activity in your Object Manager. See further down for more details.

This means you can decide on a Project basis to get currency rates based on one of the two following ways:

1) Use Currency Rates = No: Rates are coming from Main Currency rates and are converted to the selected project currency using the corresponding conversion rate.

2) Use Currency Rates = Yes: Rates are coming from Project rates converted through the Currency Conversion Rate.

"Search For Currencies On A Specific Date":

The conversion rates configured in this window take effect on new Projects.

You can use the Date and Time filters to search for conversion rates on specific date and time. This is for consultancy only.

In the Object Manager, there is a new icon next to the Buy/Sell Rate fields on the Modify window of Objects (Suites, User, Resources, Services, Materials, Expenses, Media Orders), Object Classes and Activities, that opens the Multiple Currencies Rates window. 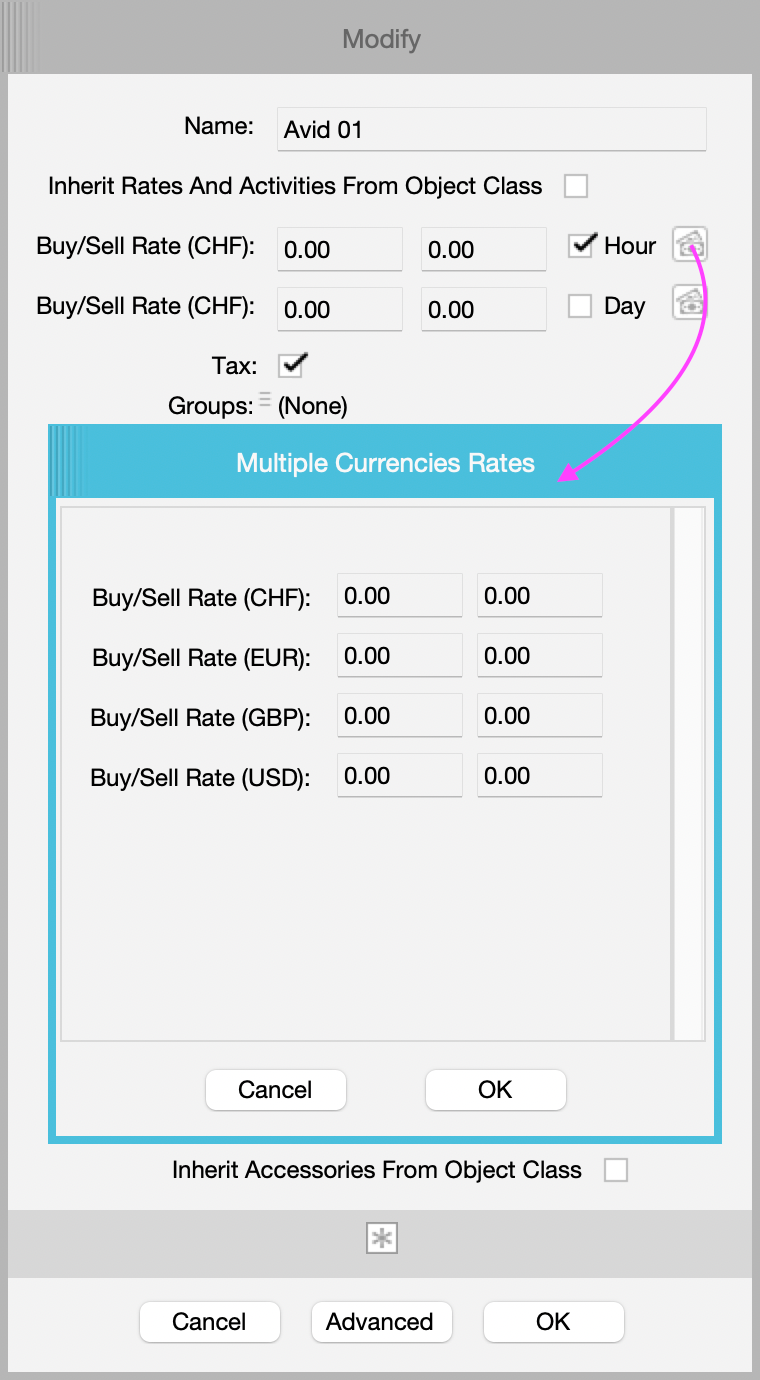 This window shows the Buy/Sell Rate fields for the main currency (at the top), and for the rest of the currencies (below), allowing you to set up prices for your services per currency.

In the Edit Project window, there is a field to select the Currency. 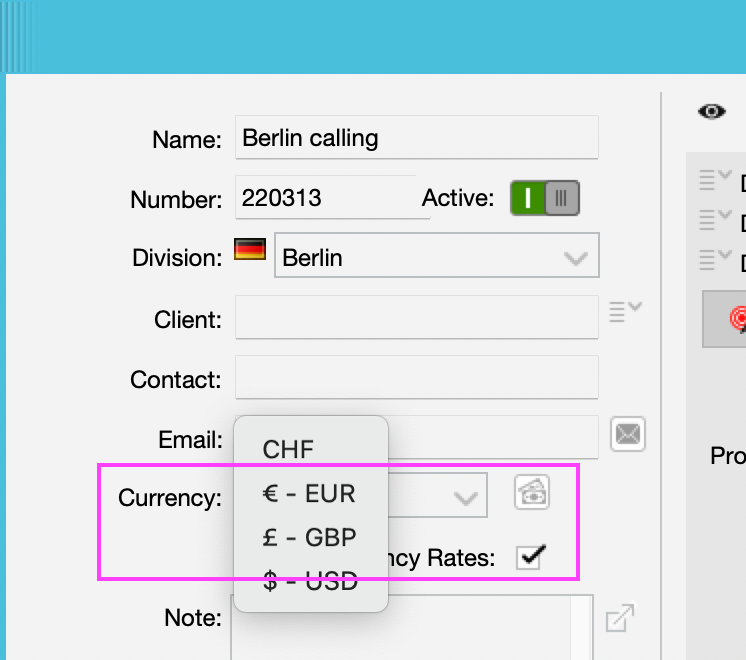 When you enable Multiple Currencies on a farmerswife that already has Projects, in all existing Projects this field will be empty. This is a mandatory field so when opening an existing project you need to select a currency for the project.

Once a Currency has been selected for the Project and you click Save or OK, it cannot be changed.

On new Projects, the Currency field will display the Main Currency by default but you can change it to another one.

If you're using Divisions, the Project Divisions will be the User's Division and the Currency accordingly.

E.g. Bernd is from Berlin Division, when he creates a new project, the Division = Berlin and Currency = EUR.

Click on the icon next to the Currency field in the Edit Project window, to open the "Conversion Rates Used In Project" window.

Only Users with "Can Edit Conversion Rates On Projects" enabled (new User Permission available for Users with Tasks/Bookings/Rates license), will be able to edit the conversion rates on a Project basis.

When enabling the "Use Currency Rate" option on a Project, instead of using the main currency rates and a conversion rate to calculate a rate for the currency used in a Project, farmerswife will directly pull the rate from the specific object currency chosen for the Project.

If an Object/Activity/Object Class does not have a rate (either buy or sell) configured on the Project's Currency, farmerswife will take the rate from that Object's main currency and convert it according to the conversion rate applied to the Project.

Invoices will have the Currency and the Conversion Rates from the Project.

The Invoice Editor shows the Currency inherited from the Project at the bottom of the window. When clicking on the value, the rest of the active currencies get listed with their corresponding conversion rate (as per Project).